Reposted from Center for Worker Freedom.

At the Summit on Workers’ Empowerment on October 6th, people interested in worker freedoms gathered to join at the Heritage Foundation to listen to ways that workers are fighting back against government, and quasi-government forces in the work place. People who have fought against unions and unfair licensing restrictions spoke on panels about their stories.

Heritage Foundation Research Fellow in Labor Economics, James Sherk, opened the summit showing the real situation of union statistics effects on wages, why union membership is falling, and where other studies have gone wrong in their methodologies.

People fighting unions were very clearly not anti-union as a few of them had actually started unions to give an alternative to big government, liberal unions. The common thing that they all had a problem with was that they all did not have any choice in the matter of being a part of a union. All members of the panel speaking on union affairs stressed this. 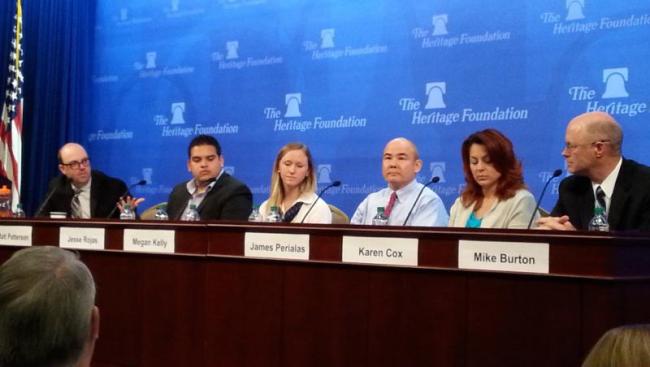 Matt Patterson of Center for Worker Freedom hosted the panel on unions, which consisted of (from left to right) Jesse Rojas, speaking for Silvia Lopez, Megan Kelly, a flight attendant for Allegiant Air Lines, James Perialas, a teacher from Michigan, Karen Cox, a lift-truck operator, and Mike Burton, formerly from Volkswagen in Chattanooga.

Some workers were more successful than others at fighting the unions. It is an uphill battle when unions or labor boards will count ballots if they predict victory for the incumbent union, and will keep ballots uncounted for years at a time when they expect a negative outcome for themselves. Jesse Rojas, a spokesperson for Silvia Lopez said that Silvia had collected thousands of signatures just in order to have an election on decertification from the United Farm Workers, twice.

The licensing panel was hosted by Derek Khanna, acting policy lead for Lincoln Labs, who had Isis Brantley, an ancestral hair braider, Sabina Loving, who owns Loving Tax Services, Inc., and Bill Main, of Segway in the City.

Licensing can keep entrepreneurs from participating in the market altogether sometimes. Isis Brantley is an ancestral hair braider, who has braided hair for more than 30 years. In 1995 the state of Texas started threatening Isis with letters saying that what she was doing was illegal, braiding without a license. Then in 1997, seven Dallas police officers raided her business and arrested her for braiding hair without a cosmetology license, a license which does not teach people how to braid hair. In 2007, the state allowed her to braid hair legally, but restricted her from teaching hair-braiding. Brantley says that this kept her from doing business for 20 years.

Another entrepreneur, Bill Main, was told he could not speak on his tour guides because he didn’t have a license. Bill’s company, Segway in the City, typically relies on younger, lively college students for their Segway tours around historic cities and sites. The District of Columbia required all tour guides to pass a 100-question exam, which has a several hundred dollar fee to take, in order to legally speak while on a guided tour. The only type of person that this would sound reasonable to is the incumbent tour guides who want to keep competition at bay, by enforcing higher barriers to entry to the tour guide industry. Bill took his case, with the help of the Institute for Justice, to the courts and won, using the first amendment as a means to free speech, whether you’re on a segway or not.

The panelists who spoke at the event were just a handful of the thousands of workers from around the nation who are kept from doing their jobs, or are involuntarily associated with labor unions. Derek Khanna ended the summit by speaking about proposing a federal law that would get rid of laws restricting people on the basis of frivolous, protectionist licensing laws. This would allow, as Khanna said, “permission-less” innovation to entrepreneurs who have the right to run a business free of red-tape, which in turn would help grow the American economy.

The entire event can be watched in the Heritage Foundation’s archives here.