Biden’s small business tax promise was made on Feb. 20, 2020 before a national audience during a Democratic debate hosted by MSNBC:

MSNBC’s Hallie Jackson: “I want to ask you about Latinos owning one out of every four new small businesses in the United States. Many of them have benefited from President Trump’s tax cuts, and they may be hesitant about new taxes or regulations. Will taxes on their small businesses go up under your administration?”

Biden: “No. Taxes on small businesses won’t go up.”

Click here or below to see Biden’s broken pledge 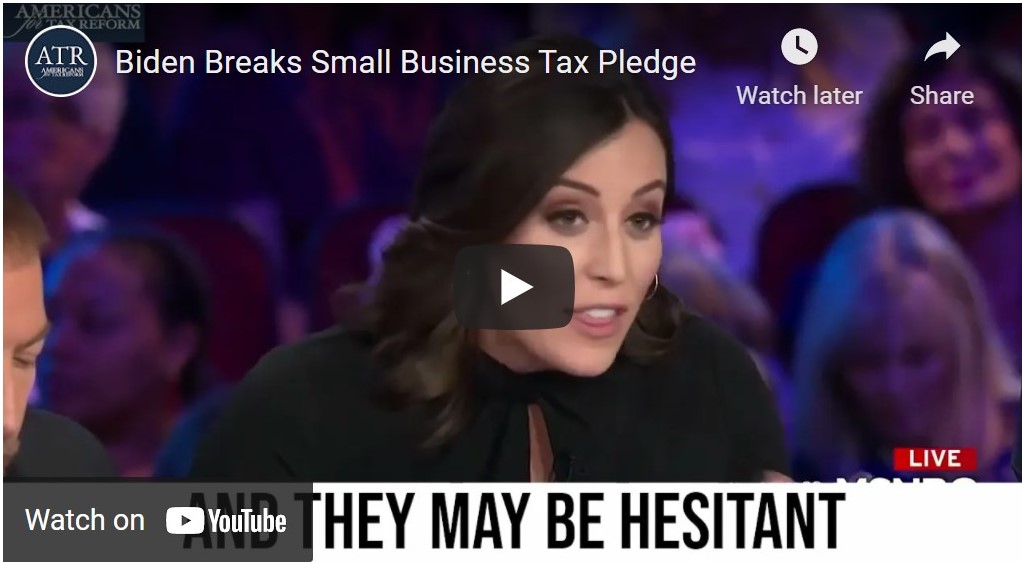 Raising the top income tax rate to 39.6 percent, which will increase taxes on businesses organized as pass-through entities like sole proprietorships, LLCs, partnerships and S-corporations.

Of the 26 million businesses in 2014, 95 percent were pass-throughs. Pass-through businesses also account for 55.2 percent, or 65.7 million of all private sector workers.

More than half of all pass-through income would be taxed at this new, higher rate.

While some Democrats characterize this tax cut as a “giveaway” or “loophole” for the wealthy, the Small Business Deduction is limited to prevent taxpayers from taking advantage of the tax code by improperly allocating wage income, which is paid by the individual, as business income.

One of the main limitations within the deduction is a wage limitation combined with a capital limitation. The wage limitation applies to taxpayers with greater than $315,000 in income for joint filers or $157,500 for single filers and is phased in over the next $100,000 or $50,000, respectively.

Past this threshold, the deduction is limited to the greater of 50 percent of a business’s W-2 wages or 25 percent of W-2 wages plus a capital limitation of 2.5 percent of the “unadjusted basis” immediately after acquisition of all qualified property.

Raising the corporate tax rate to 26.5 percent, a rate higher than Communist China. As noted by the Small Business Administration Office of Advocacy, there are 31.7 million small businesses in the U.S. Of those, 25.7 million have no employees, while 6 million have employees. Of these 6 million small employers, 16.8 percent, or 1 million of these businesses are classified as c-corporations. The SBA classifies a small employer as any independent business with fewer than 500 employees.

Biden claims his spending plan makes large corporations pay their “fair share.” However, the plan will raise taxes on many small businesses that are structured as corporations.

A recent study from the U.S. Chamber of Commerce found that 1.4 million small businesses organized as C-corporations in every sector of the economy: “agriculture, construction, health care, real estate, finance, and more.”

The analysis also details the state-by-state impact of this tax hike on small businesses:

While Democrats have often described this as a “loophole,” Biden has repeatedly utilized this strategy in a practice that left-leaning tax experts described as “aggressive.” Specifically, he avoided paying $500,000 in payroll taxes including $121,000 in Obamacare taxes by sheltering $13 million of income in several S-corporations.

It is clear hypocrisy that Biden used the same loophole that he now wants to close. Moreover, Biden supports expanding Obamacare and routinely says “the rich” need to pay their fair share.

Makes permanent the cap on passthroughs deducting net operating losses. This makes the $500,000 cap on passthrough businesses deducting excess business permanent. This could impact a restaurant, retailer, or other capital-intensive business that sees significant business losses in any year due to the cost of wages, rent, new equipment, inventory, and interest payments.

The cap was originally created by the Tax Cuts and Jobs Act passed by Congressional Republicans. It was used to offset the creation of the 20 percent deduction for passthrough businesses, which resulted in a net tax cut for taxpayers. Democrats are proposing to make the cap permanent, but not the 20 percent deduction, resulting in a significant tax increase.

The Democrat tax-and-spend plan will see small businesses hit with hundreds of billions of dollars in higher taxes, despite Biden’s earlier pledge.