Today, Americans for Tax Reform launched a significant campaign across a number of different electronic media, highlighting the need to stop those Obamacare taxes that haven’t yet taken effect – particularly the Health Insurance Tax – while we work toward the repeal of all Obamacare taxes. 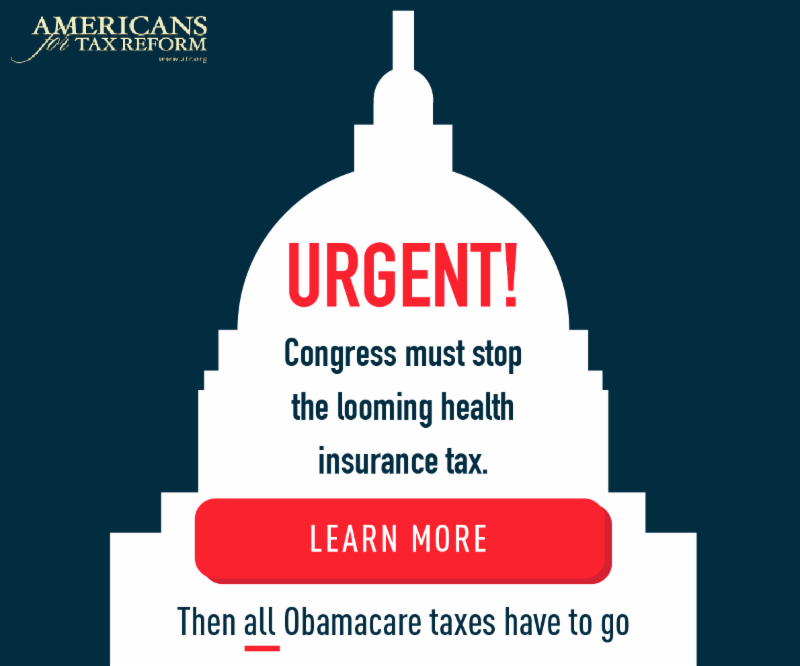 The effort to fully abolish the Obamacare tax burden on families and businesses should be divided into two steps:

In the short-term, Congress must quickly act to ensure that the health insurance tax and medical device tax are delayed. Failing to act will mean both taxes go into effect at the end of 2018, which will cause costs to skyrocket even higher.

At the same time, lawmakers must continue to press for the repeal of all of the Obamacare trillion dollars in new or higher taxes. These taxes have increased healthcare costs, restricted access to care, and harmed economic growth. Since its inception, Obamacare has imposed numerous taxes on the American people including a tax for failing to purchase government approved health insurance, a tax on innovative medicines, multiple taxes on Health Savings Accounts and Flexible Spending Accounts, and even a tax on families with high medical bills.

All of these taxes impact the middle class – either directly hitting families’ paychecks or by increasing the cost of healthcare goods and services. On the other hand, repealing these taxes will reduce the federal government’s control over healthcare and return power to caregivers and patients.

While all Obamacare taxes should be repealed, lawmakers must also act quickly to ensure that they do not allow a tax hike to go into effect under their watch. If they fail to act, the medical device tax and health insurance tax will become law on January 1, 2018, resulting in higher premiums and higher costs for middle class families, seniors, and small businesses.

The Obamacare health insurance tax hits 11 million households that purchase through the individual insurance market and 23 million households covered through their jobs. Half of this tax is paid by those earning less than $50,000 a year and it is responsible for increasing premiums by an average of $5,000 per family over a decade according to research by the American Action Forum.

The $30 billion medical device tax is similarly harmful to businesses. It could cost as many as 25,000 lost jobs by 2021 if it is not delayed, and because it is levied as an excise tax on medical devices, the costs of this tax are almost entirely passed onto consumers in the form of higher products, as noted by the Congressional Research Service.

Obamacare’s taxes have already driven costs up, reduced choice, and needlessly punished American families with higher taxes. The last thing that taxpayers need or deserve is even more damaging Obamacare taxes to go into effect.

Instead, Congress should work on healthcare reform that is focused on lower costs that includes repeal of Obamacare taxes — first by ensuring that the health insurance tax and medical device tax do not go into effect — and then working to repeal all trillion dollars of the law’s taxes.